T5 Troops are some of the strongest troops in Final Fantasy XV: A New Empire, and they are now easier to get than ever before.

This article will lead you down the Road to T5, and covers when you need to begin preparing, what the building requirements, and the final research sprint to unlock all T5 troops.

We hear a lot of people ask, “Can’t I get by on T4 and some good gear/boosts?” And the answer is an unequivocal, “No!” Offensive players will soon be left in the dust, if they don’t embark down the Road to T5.

Even with the best gear, research,  item boosts, etc, T4 troops still can’t hold a candle to the sheer power of T5.

If you are committed to the Road to T5, There is good news and there is bad news.

The good news is that acquiring T5 troops is now half as expensive as it used to be at the beginning of the year. More and more people are unlocking T5 every day, and it is because now, Royal Blueprints and Research Scrolls are easier to get than ever.

The bad news is that it will be a long and bumpy road. For some, it is mentally, physically, and financially exhausting. It will make you question why you even started playing this game to begin with. But to the victor go the spoils. When you come out on the other side, and you will be join the elite club that is the most powerful players in all of Eos.

After after you hit Level 35, you should begin preparing for T5 troops. That means saving up Royal Speedups, building up plenty of marble and essence, and above all, saving every single Royal Research Scroll for Combat Research. Don’t use any Research Scrolls on any other research tree other than Combat. You will need as many as you can get — and then some.

In fact, after you have your Ward Traps unlocked under Defense Research at the University, you should begin diligently researching every single tier of Combat Research that your current level will allow for. This will ensure you don’t get left in the dust when you are closing in on Citadel 40.

Unless you happen to be one of those lucky individuals who are loaded with resources, save every Empire Quest you can complete, once you start your T5 push. You’ll be able to unlock them all when you need resources, and get quite a bit to help you along. As far as Royal Speedups go, save as many of the 24 hour speedups as possible, and have a small cache of 1 hour speedups available to complete research. Gold has been very abundant lately in packs, as well as in events, so try to keep your gold supply above 10 million, until you actually hit level 40.

Two essential items you’ll need to get T5 are the 50% off Royal Building Blueprints Pack and 50% off Royal Research Scrolls Pack. It simply cannot be done easily without these items, so look for those packs as early as possible. All of the Royal Research and Royal Construction time lifetime speedups will be extremely helpful, as well. You can also unlock more cost-reducing boosts through the Oracle Temple, however it does require massive amounts of Oracle Artifacts.

If you haven’t already, I strongly recommend completing every piece of Economy Research that doesn’t require Research Scrolls. Things like Construction Speed and Marble Production will be a lifesaver as you get closer to level 40, and so will every single Research Scroll you saved early on.

Last but not least, just like Royal Research Scrolls, save every single Royal Building Blueprint you get for the Citadel upgrade requirements. Don’t upgrade any other building, unless it is required to ultimately get your Citadel up to level 40.

If you’re having a hard time coming across Royal Blueprints and Research scrolls, take a look at our article that tells you every way to find blueprints and scrolls for free here.

Note: At Level 39, you will be able to unlock a pack that contains a ton of Royal Speedups and Royal Blueprints. This is the single best pack for T5 that you can get. We recommend buying as many of these packs as you can afford to ensure that you have a healthy stockpile to unlock T5, and make your T5 troops.

On the Road to T5 troops, there are three building requirements. The first is level 40 Citadel, then level 40 University, and finally, level 40 Training Grounds.

Naturally, all 3 of these buildings will have the usual upgrade requirements of their own.

Note: during the Empire Ascension event, when the packs with 100 Royal Builders Blueprint chests and Research Scroll chests first came out, players who upgraded their Citadel to level 40 were only seeing packs for Exalted Blueprints and Tones, when they still required Royal Blue Prints and Scrolls. This bug has since been fixed, and it is now possible to purchase packs containing 100 Royal Building Blueprints and Scrolls, even after level 40.

You should be working on your combat research all the while upgrading buildings to 40. This will substantially lighten the load of the massive amounts of research that must be done on your way to T5.

This is what a completed T5 research skill tree looks like: 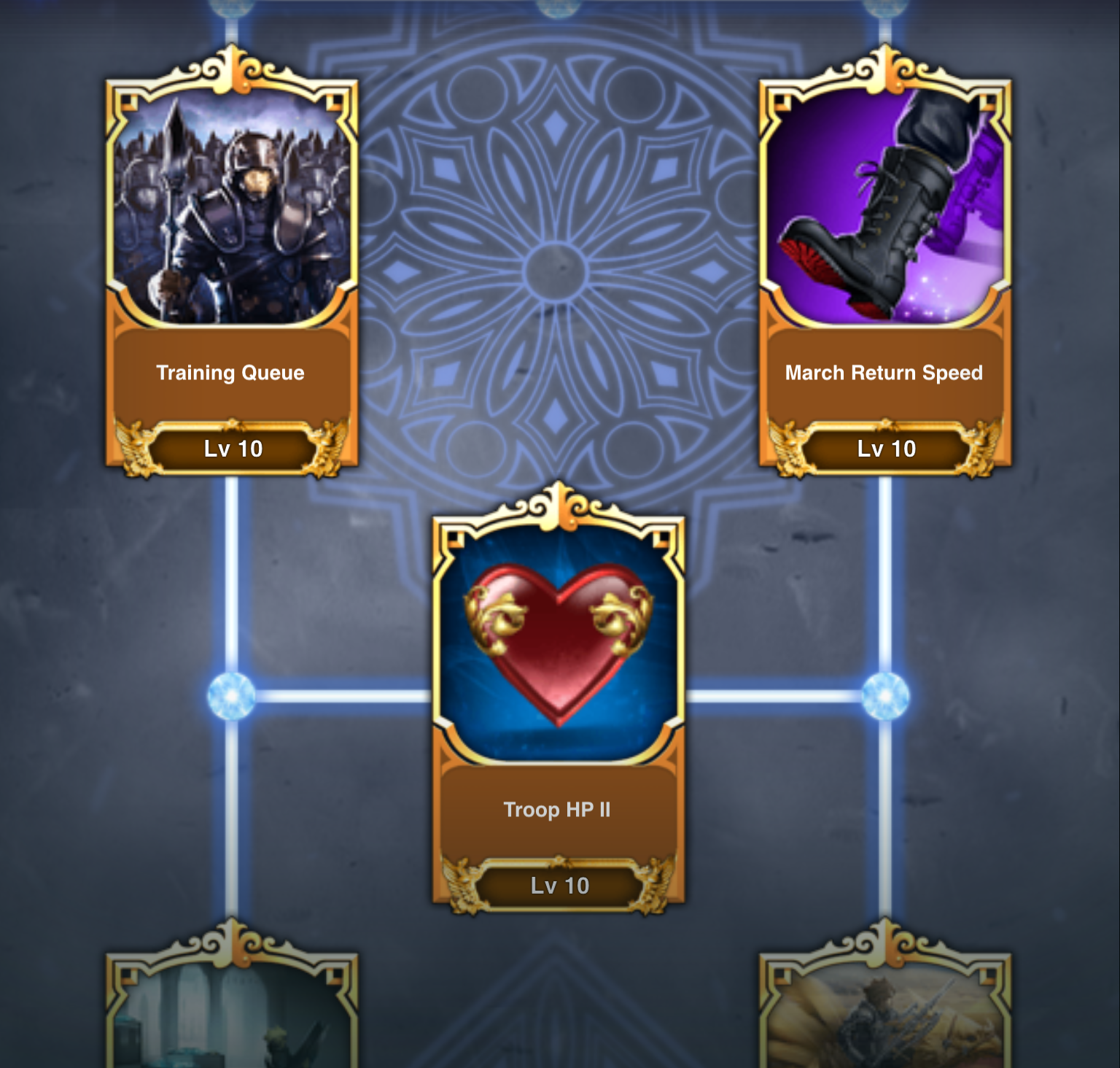 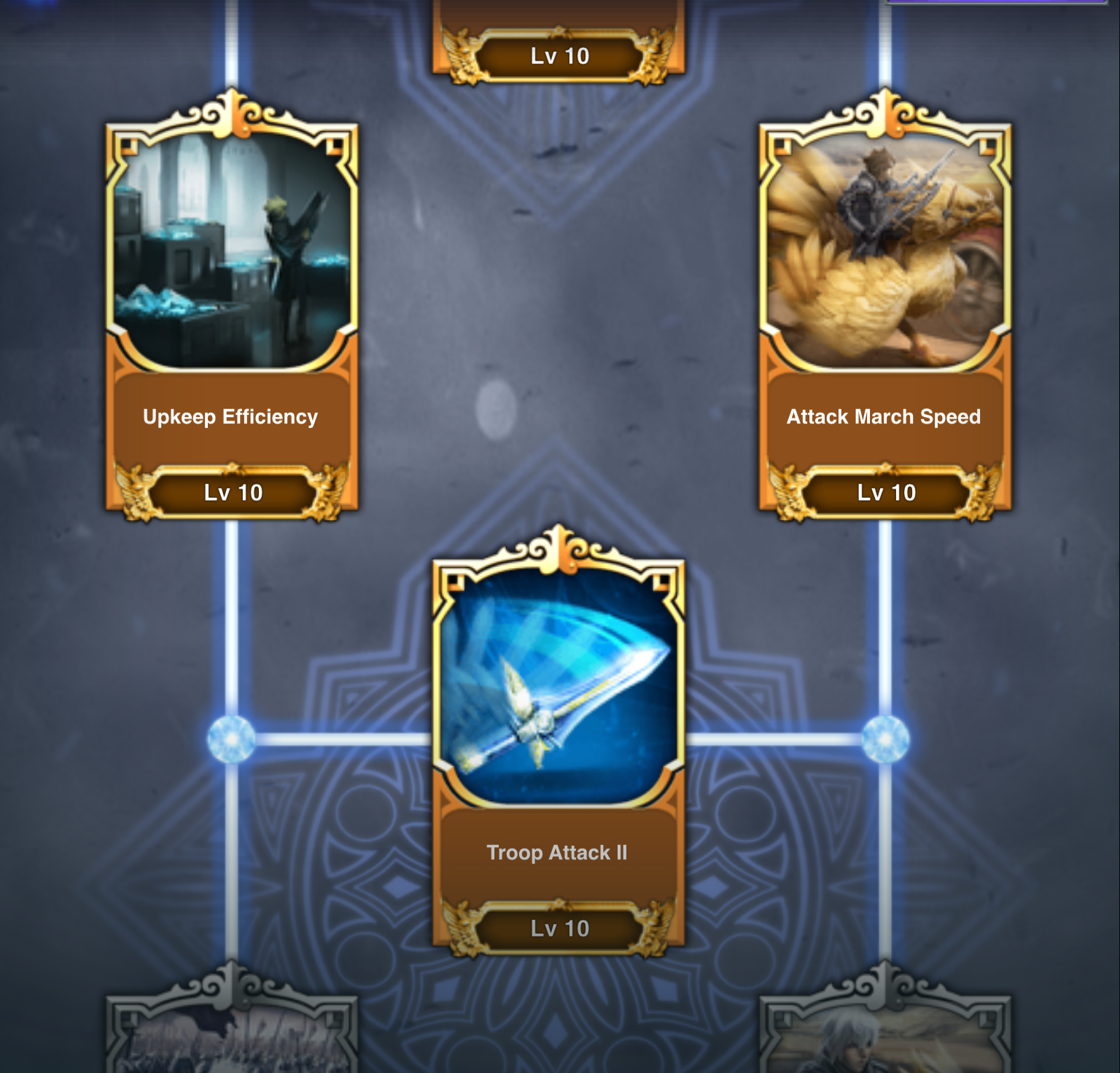 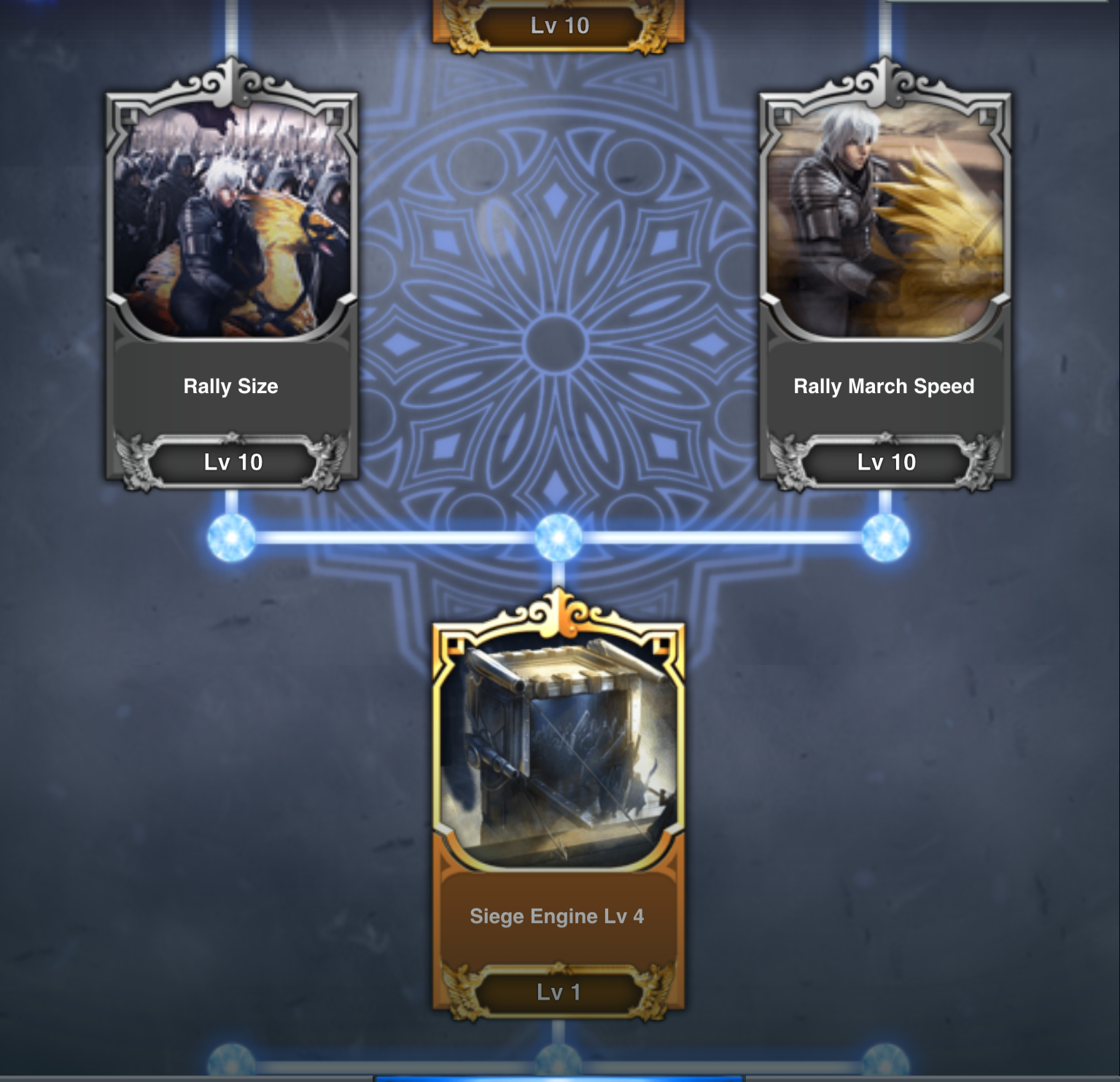 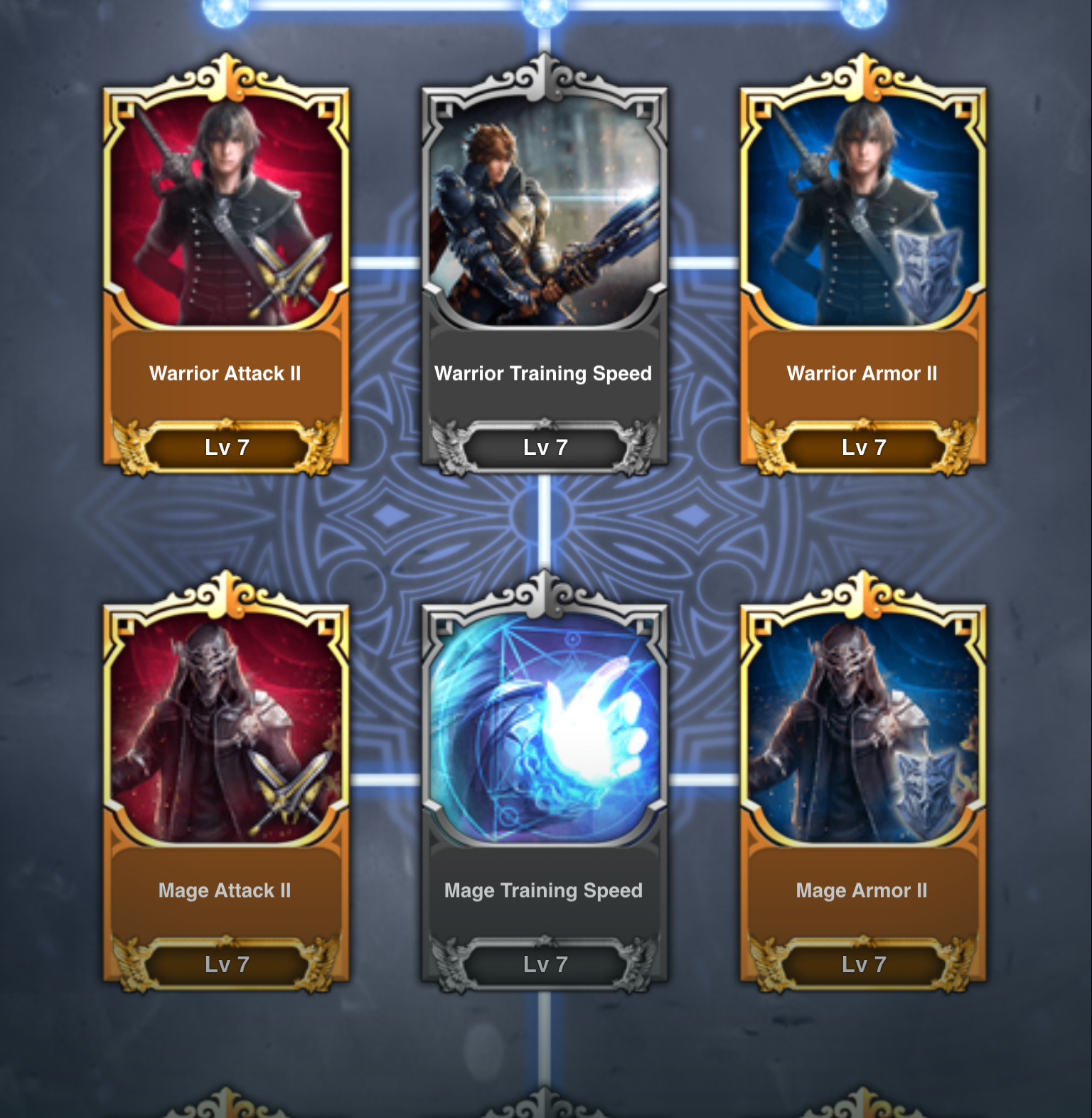 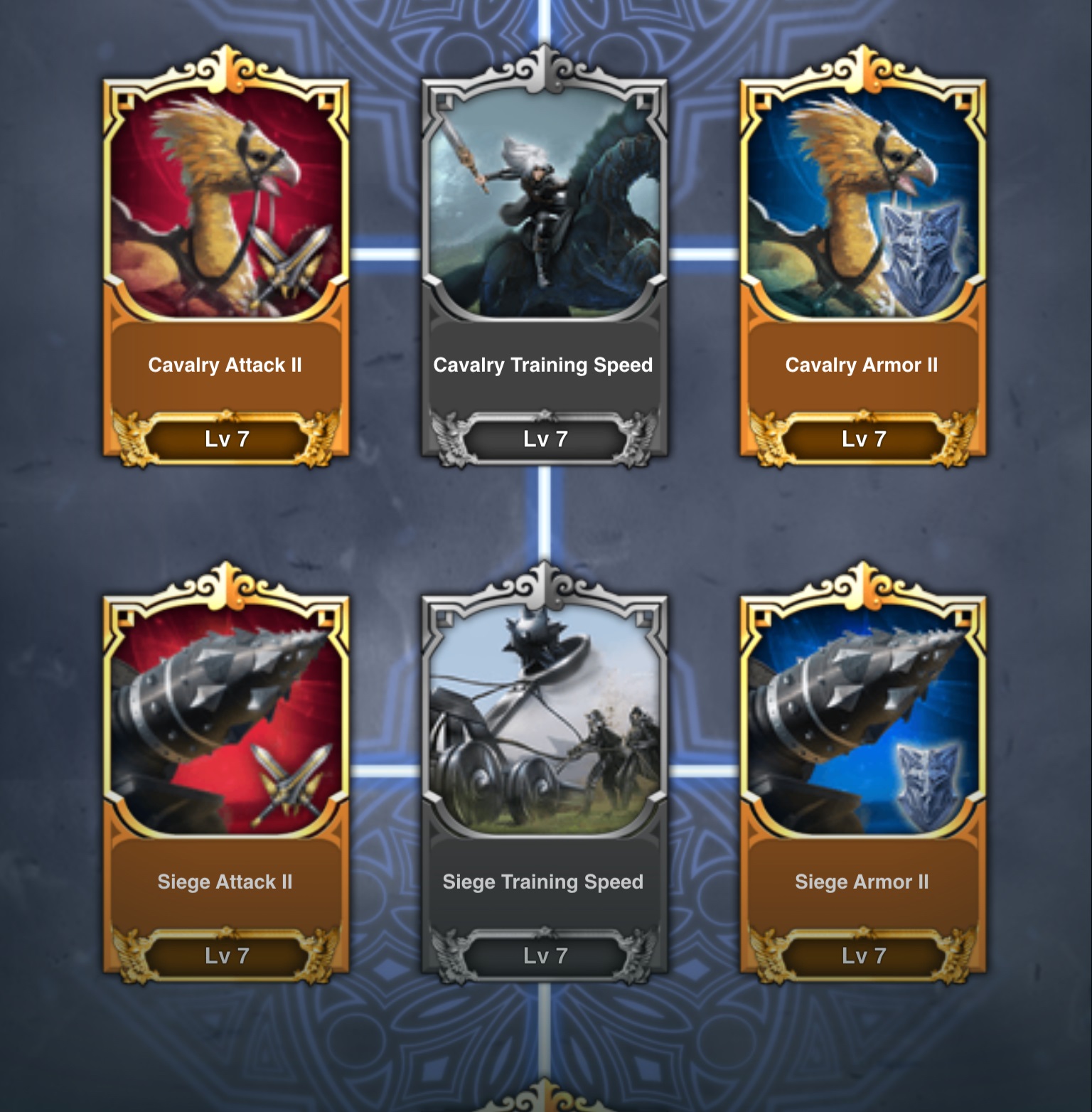 Here is a list of all of the research that must be completed before unlocking Warrior, Cavalry and Mage Level 5. This list is sorted from T5 to T4, so if you are just starting out, you will want to start at the bottom of this list:

If you’re looking to unlock your T5 troops as quickly as possible, the best way to do it is to focus in on your goal, and don’t get distracted by any other part of the game. For example, the new VIP levels provide some amazing benefits, but if you purchase a VIP point pack or any pack without Royal Research Scrolls or Blueprints, you are only holding yourself back from reaching your goal.

Keep your eye on the events, but only participate in the ones that further your goal of unlocking T5. Events that give a lot of Royal Research Scrolls, Blueprints, and massive amounts of resources/speedups are the only ones you want to complete. At this time, everything else is a waste and only serves to distract you from reaching your goal.

Remember, there is nothing wrong with asking for help. Your guildmates probably want you to unlock T5 as quickly as possible and in most cases will happily send you resources to further that goal, so long as you pay it forward later on.

Lastly, the best way to unlock full T5 troops as quickly as possible is to just do it. If you don’t have the money to purchase the 10-20 packs required to unlock T5 then don’t start down that road. Otherwise, it will just end with frustration and regret, and those are not things that you want to associate with a game you enjoy playing.

So you’ve unlocked a full army of T5. Congratulations! You will immediately notice just how powerful these troops are and how gameplay changes significantly once you’re using T5.

The next big hurdle is just around the corner. All of the relevant research will now require Exalted Research Tomes, so hopefully you picked up a couple thousand of those while buying packs that offered Royal Research Scrolls.

Combat Research in particular has some amazing benefits after unlocking T5. Although a higher Citadel and University are required, you can increase your Troop HP, Armor, and Attack by more than 100% with the research that follows.

The important thing to remember about T5 troops is that they require T4 resources to build (Banknotes, Manna, Obsidian, Corn). They also require Royal Research Time, and lots of it! Alternatively, one full march of T5 troops will cost you about 1 million gold to build. This makes building a massive army of T5 troops extremely difficult, which is why we recommend keeping some T4 in your Training Grounds and only using T5 when absolutely necessary. Look into completing all of the Training Speed time reduction research possible at your current university level.

Congratulations on your T5 troops! We want to leave you with the wisdom of Uncle Ben, “With great power comes great responsibility.”

Make sure to like our content and if you want to stay up to date with our new releases, connect with us on Facebook or chat with us on our Discord and Line channels!

The Advent of Dark Elementals

March Size in the Dark World

Troop Along with FFXV: ANE