Tier 3 Troops are an important upgrade for combat effectiveness in Final Fantasy XV: A New Empire, allowing you to attack and rally with much more success than with Tier 2. In this article, we are going to lay out the exact Roadmap to Tier 3 Troops and dispel any confusion about what is required.

We will also provide strategies to overcome the resource challenges, and discuss whether or not you even require T3 troops in the first place. Finally, we will tell you what you need to do before you train T3 troops.

Why Do You Need T3 Troops?

The first thing you might ask yourself when beginning on your quest for T3 is whether or not you even need these troops. The overwhelming answer is yes.

T3 troops are the most basic defense tool in your empire, especially in realms now dominated by T4, T5,  and even T6. With the announcement of T7 release on March 27, 2018, it is more important than ever that you have T3 troops as an absolute minimum requirement, just to survive in the game.

Unlike when this game first started, T3 troops are no longer an option for most realms. T3 troops are a complete necessity and essential for survival in the game.

Tier 3 troops are more powerful at base than Tier 2 troops — 1.5 times as strong, to be exact.

In addition to being 1.5 times as strong as T2 troops, for new realms, T3 troops have an additional advantage: they tend to be rarer. You are going to have more available targets that you can win against as a T3 player than a T2 player, in a realm under 2 months old.

The process of getting T3 requires you to perform a substantial amount of combat research that provides an enormous amount of combat power, in comparison with T2. At University 20, which is the first step on the roadmap to T3, the stat increases you will be able to receive in Troop Attack, Troop Armor, and Troop HP are substantial when you fully max your combat research  tree.

Additionally, the Roadmap to T3 Troops can also simultaneously dovetail with your defense goals, as unlocking University 20 also opens up a huge amount of defense research.

Let’s begin on our road to T3!

How to Get T3 Troops

The first hurdle to getting Tier 3 Troops is making sure you have a high enough University level to do the research.

How to Upgrade University to Level 20

In order to research T3 troops, you will need to have University Level 20, which requires you to have Citadel Level 20 as well, if upgrading without the use of any packs or upgrade items.

For the purpose of this section, we will primarily discuss how to upgrade to University and Citadel 20 organically. (Though, keep on reading to find out how you can upgrade these buildings instantly.)

Citadel level 19 is full of building dependencies that backtrack in a confusing way. It can seem like you have just one more building upgrade to go before you get to the Citadel 20 unlock screen, for a long time.

The truth is that you need one of each unique building (Hospital, Prison, Training Grounds, etc.) at level 19, one of each type of rss building at 19, and one each of the barracks, hospital ward and bank at 19 to unlock Citadel 20.

Don’t be fooled by the feeling of being “almost there.” Everything needs to be at 19. And when you get there, this is the cost: 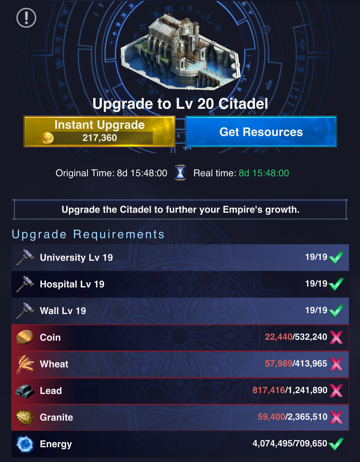 Ways to get around this:

However you get there, Citadel 20 lets you unlock University 20. This upgrade also requires significant T2 rss, although less so than Citadel 20.  One you get past the Citadel and University, there is still one more hurdle.

Similar to the buildings, the exact amount of research you need to unlock T3 is hard to see clearly before you are there. It can seem like you are very close to getting to the T3 unlocked, only to have to backtrack down the tree to max something before you can finish the siege attack or siege armor pre-reqs. Siege Armor 7 and Siege Attack 7 require you to max the combat tree below them, which is not visible before you get to those research levels.

The checklist below shows the exact T3 research requirements.

When you have completed all of the requirements, your combat tree will look like this: 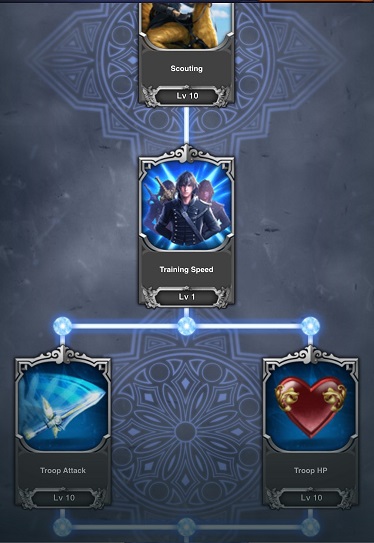 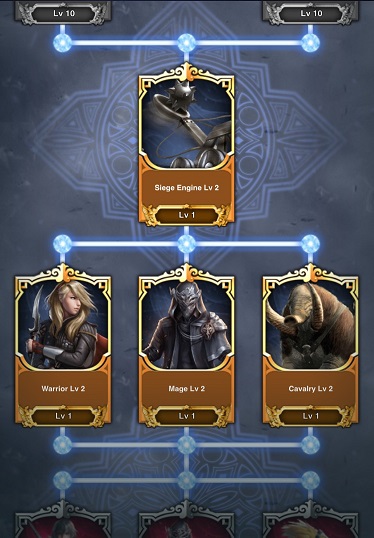 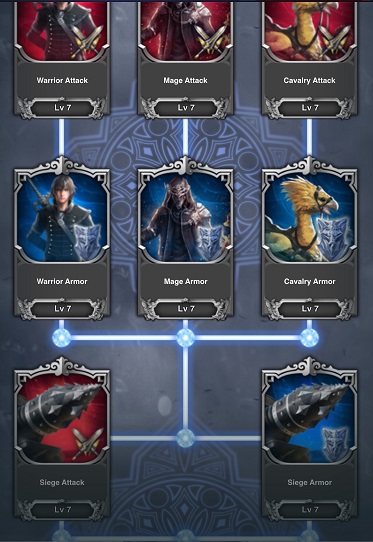 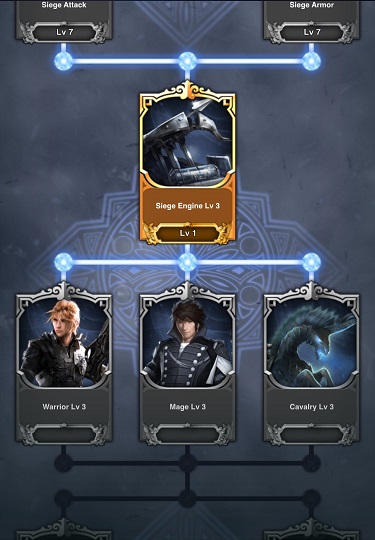 If your lower-level Combat research skills are not as high as  in the checklist or screenshots above, you have more work to do before you can get tier 3 troops.

Once you get there, there are the T3 unlocks themselves: 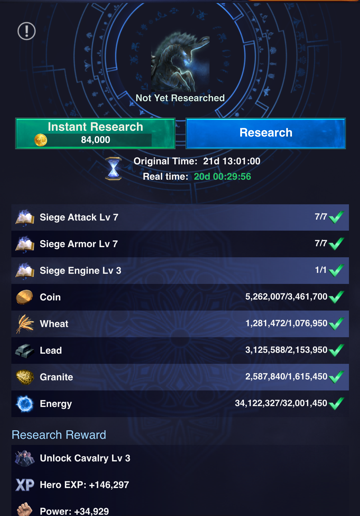 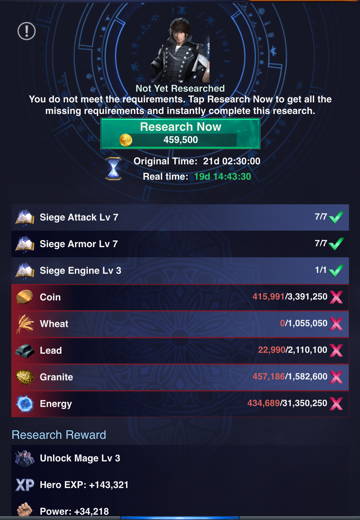 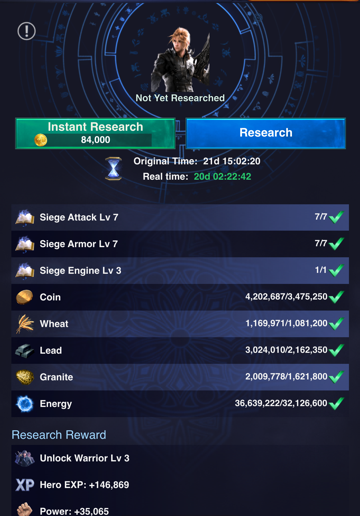 Furthermore, the energy cost can be partially mitigated by putting research into troop load and gathering speed in the Economics tree and using T3 siege to gather from level 5 or 6 energy tiles. A march of T3 siege backed by Economics research and ideally the gathering speed pack boost can churn out hundreds of thousands of energy every few hours if you are near the Scar and can hit the level 5 and 6 energy tiles.

Getting Speed-Ups and Gold

The other issue with T3 is the time requirement on the buildings and research. There is very little way around this other than buying packs, but there are a few additional things you can do that will help:

Once you have T3 troops, a problem that you will run into if your army becomes sizeable enough is wheat. Tier 3 Troops consume wheat, not food — and in high quantities. Eventually, you will not be able to produce enough wheat to sustain your troops and empire, and will notice that your upkeep is severely negative. This is normal.

If you are buying a lot of packs, this may not become a problem for you, as the packs include a large amount of wheat. Events also can provide a fairly decent amount of wheat items, but usually, they are not enough for major upgrades or training.

To mitigate this issue, we recommend that you work on building a wheat hyperfarm on an alternate account. Wheat is the earliest T2 rss to unlock at farm level 15. Getting to Citadel 15 is much less a challenge than the later levels, especially if you have multiple T1 rss farms feeding rss to your food farm to level it. That way you can move wheat from your alternate account to your main as needed to buy new troops or upgrades.

Congratulations! Now that you have completed all of your combat research, you have the ability to train T3 troops.

You might think it’s a great idea to start training these troops with whatever resources, gold, and speed-ups you have in your empire. However, in actuality, this is a terrible idea.

The reason why you never want to train T3 troops before you’re ready to take attacks from T4 or higher is because you will be too easily zeroed.

Newer players often make the mistake of thinking that they should train a small amount of T3 troops before they’re actually prepared to defend their empire, and this often results in them losing everything repeatedly. The reality is, strong players are looking for empires to burn, and are less likely to burn an empire that has no troops than an empire with troops.

If you do not have enough T3 to a sustain an attack, you will not only lose all of your troops (and potentially your hero, if you failed to ghost rally your hero out of your empire), but you will also have wasted all of your hard-earned resources, gold, and speed-ups.

You might ask yourself, “Then what am I supposed to do?”

The answer is simple: Wait until you have enough gold, speed-ups, and resources to mass train an enormous army which can resist whatever you are trying to defend against. Also, don’t bother training this army until you’ve maxed your research, built your empire properly to defense specifications, and sufficiently leveled up your hero and crafted decent gear. Read more on Combat Defense here.

These are the steps we recommend you take before mass training T3 Troops if you want to survive and not waste your resources.

If you are a new realm with a handful of T4 players, you can probably get away with training a lower number of each T3 type (not including siege) and survive the majority of T4 attacks. However, if you are in a realm with a lot of T4s or T5s, you are going to need to begin scaling that amount far higher.

While we can provide recommendations for the amount of troops you must train, everyone’s build is different, which means there are no universal recommendations that can be provided. So, if you’d like to know how many T3 troops you need to train to be safe, please join us on Discord and ask in the #defense section.

While T3 troops do definitely give you an edge, it’s important to note that defense is very powerful in Final Fantasy XV: A New Empire. With the right gear, hero, and research in the defense tree with a very large T2 troop count, some players may be able to defend against most T3 solos or rallies, and even some T4 attacks, depending on the combat research and gear of the attacker. 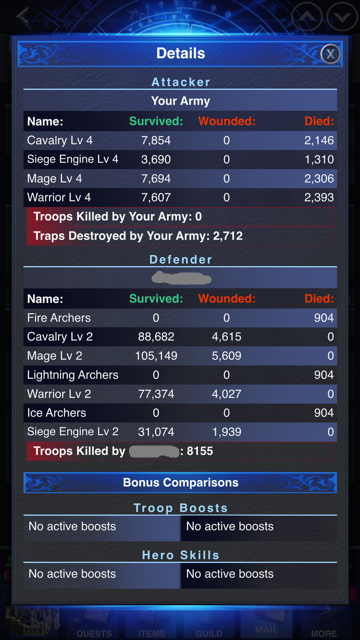 While the above screenshot is technically a “loss” for the level 19, and no heroes were involved either way, the casualties fall in the hospital limit for the level 19 player even at fairly low troop count and incomplete level 19 defense research. At higher defense research and troop count with a combat-skilled Hero on defense, the T2 player would have been able to kill a lot more troops while losing fewer. The defense would have been even stronger against T3 solos, although not proof against T3 rallies in this case.

Important Note: The Combat Research past level 31 gets VERY powerful. A level 35 player with good Arbiter gear can do a LOT more damage than the player above, and T1/and T2 alone will not be enough; you need T3 and reins, or a shield. But you can defend against a fresh level 30 T4 player with T2.

Given this information, if you are not buying packs or have an Instant Upgrade item to shoot straight to T3 troops, you should work on defense FIRST and then work towards T3 troops. Research defense and then get yourself a large number of troops to shelter behind while saving up for T3. You’re going to have enough trouble without becoming an rss pinata to the stronger players.

And if you have just acquired T3 and are attacking with them, be aware that T3 do not allow you to steamroll every T2 player. Follow the usual advice in the Combat Attack Guide like sending an initial test strike without your hero or rallying large targets to deal with tough T2 empires.

T3 are a huge advantage in combat, but you will have to either buy a large number of packs or pull out every single stop to get past the rss hurdles.

Once you do, you will be much stronger on defense and attack and you will have a lot more options on who you can attack. Be aware that you may still need to rally large T2 targets, though.

The Advent of Dark Elementals

March Size in the Dark World

Troop Along with FFXV: ANE