Everyone was guessing who the next playable hero would be, and of all the characters we've encountered thus far in Final Fantasy XV: A New Empire, there weren't many people who guessed correctly.

We've had only a handful of encounters with the mysterious Aranea Highwind before. Notably, she appeared during previous RvR to graciously give us a chest full of handy combat boosts. Now, Aranea joins us in battle and brings with her an entourage of powerful new mercenaries.

This guide will show you how to unlock Aranea, examine her hero skill tree, and show you some of the best uses and play styles for her.

This may be a shock to many players, but unlike Prompto, Luna, and Ignis, you can unlock Aranea without buying her in a pack. Aranea's Grand Entrance events allowed you to win an item that you could send to anyone in your guild to unlock her! Unfortunately, this item does not unlock Aranea for yourself, however, players all over the real seem to be coupling up to exchange Aranea Unlock Tokens. It is also possible to buy the Aranea Unlock item in certain packs, which you will be able to gift to a friend! 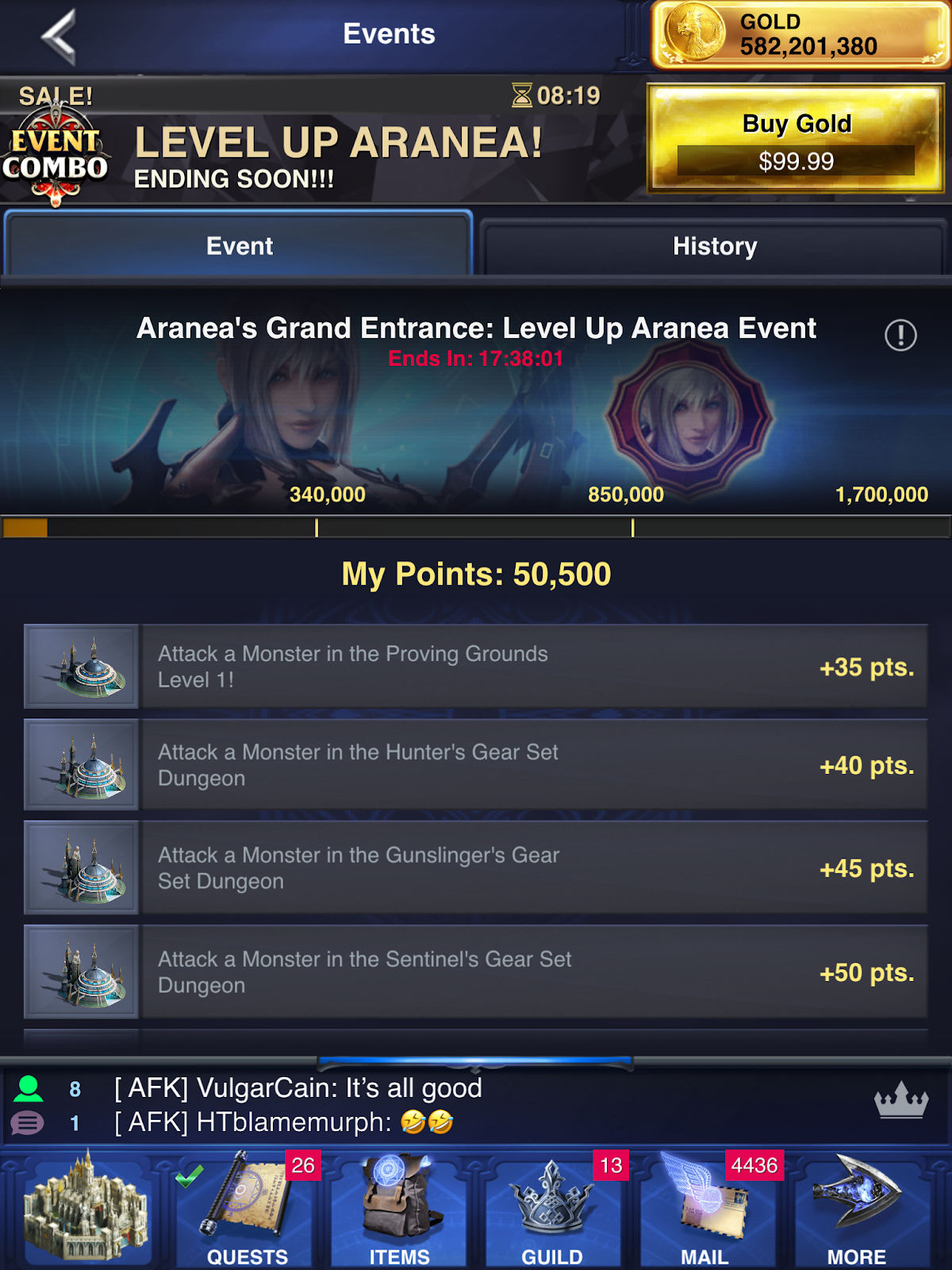 To win an Aranea Unlock Gift for one of your guildmates, you must complete the 3rd tier requirements of specific Aranea events when they are available. The events vary in nature, so be sure to check the requirements before you embark on your Aranea Unlock journey!

Aranea has some very unique and potentially powerful skills. We are going to break down her skill tree one-by-one. 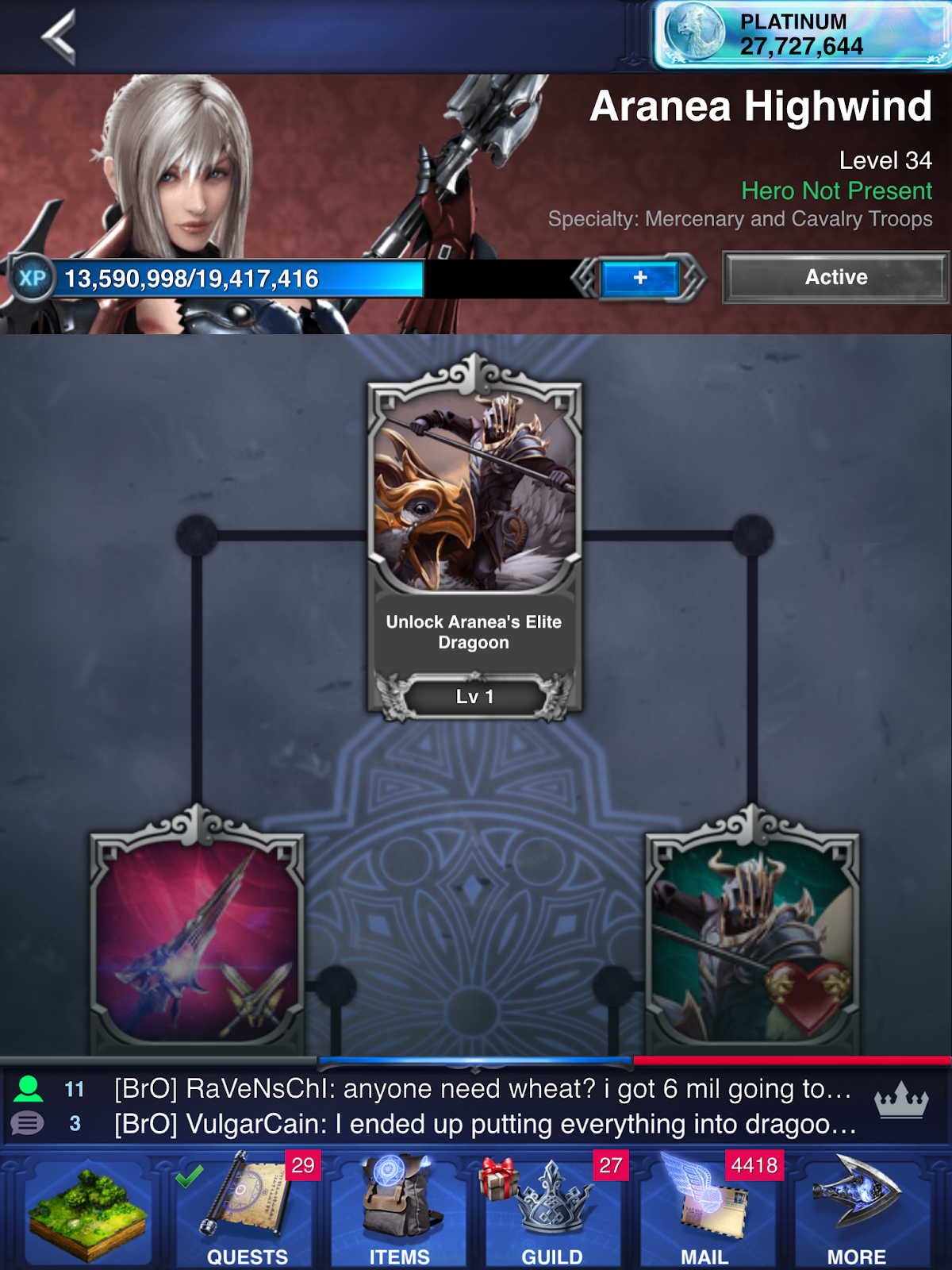 After unlocking Aranea’s Elite Dragoons, her first skill, you will be able to train mercenaries by the same name in the Mercenary Fighting Pits. These troops not only look identical to the Dragoon Raiders, but they are also equal in stats. This makes them the equivalent of T4 troops in terms of Attack, HP, and Armor; however, they are, by far, the fastest troops available, making them perfect for long-range assaults as well as racing to be first on a tile. 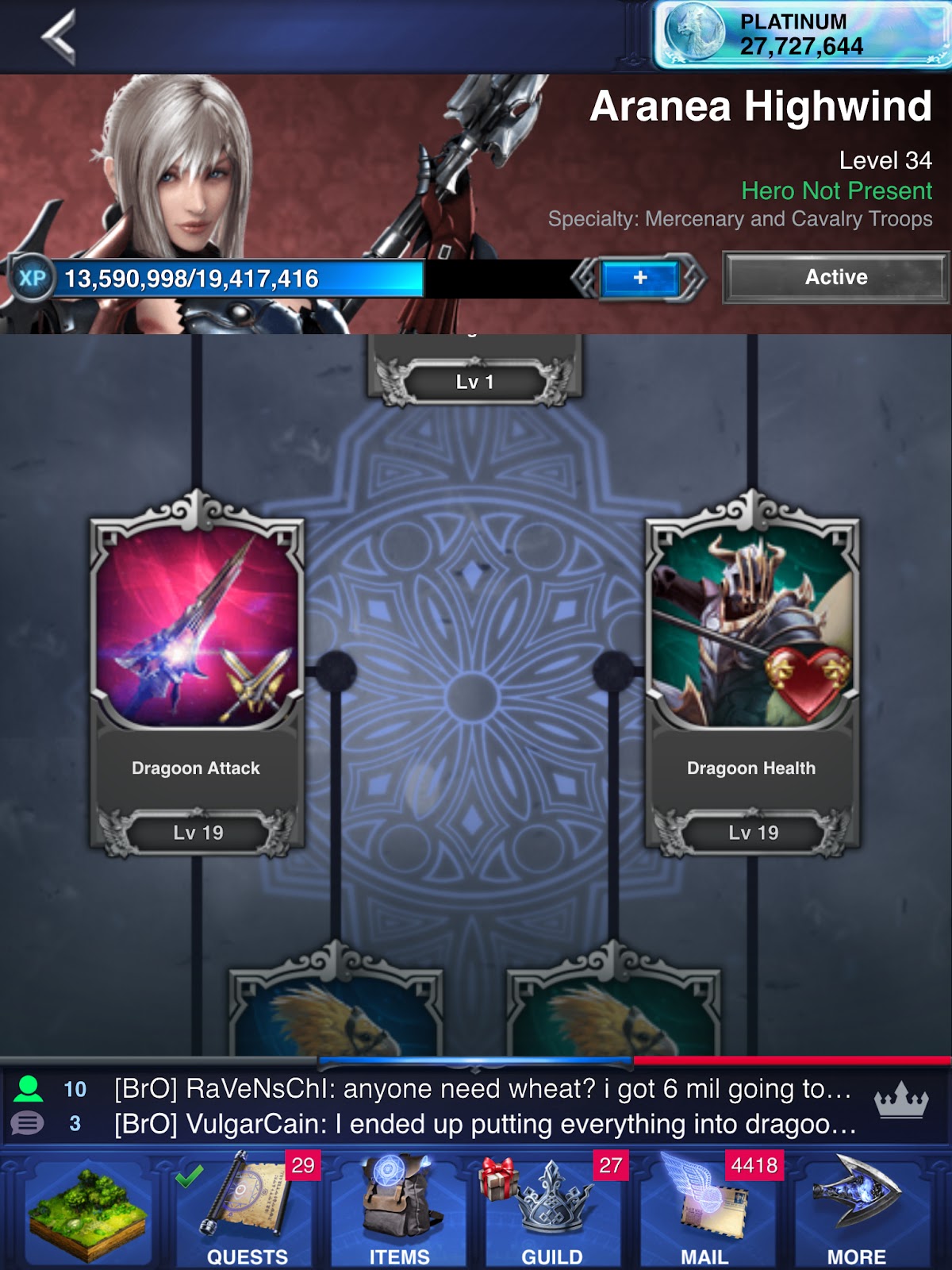 Dragoon Attack and HP are Aranea’s next skills, which serve to further strengthen her Elite Dragoons, Raiders, and Reavers. This skill is perfect for destroying Magitek, but beyond that, she has a few other skills that might be a better investment. 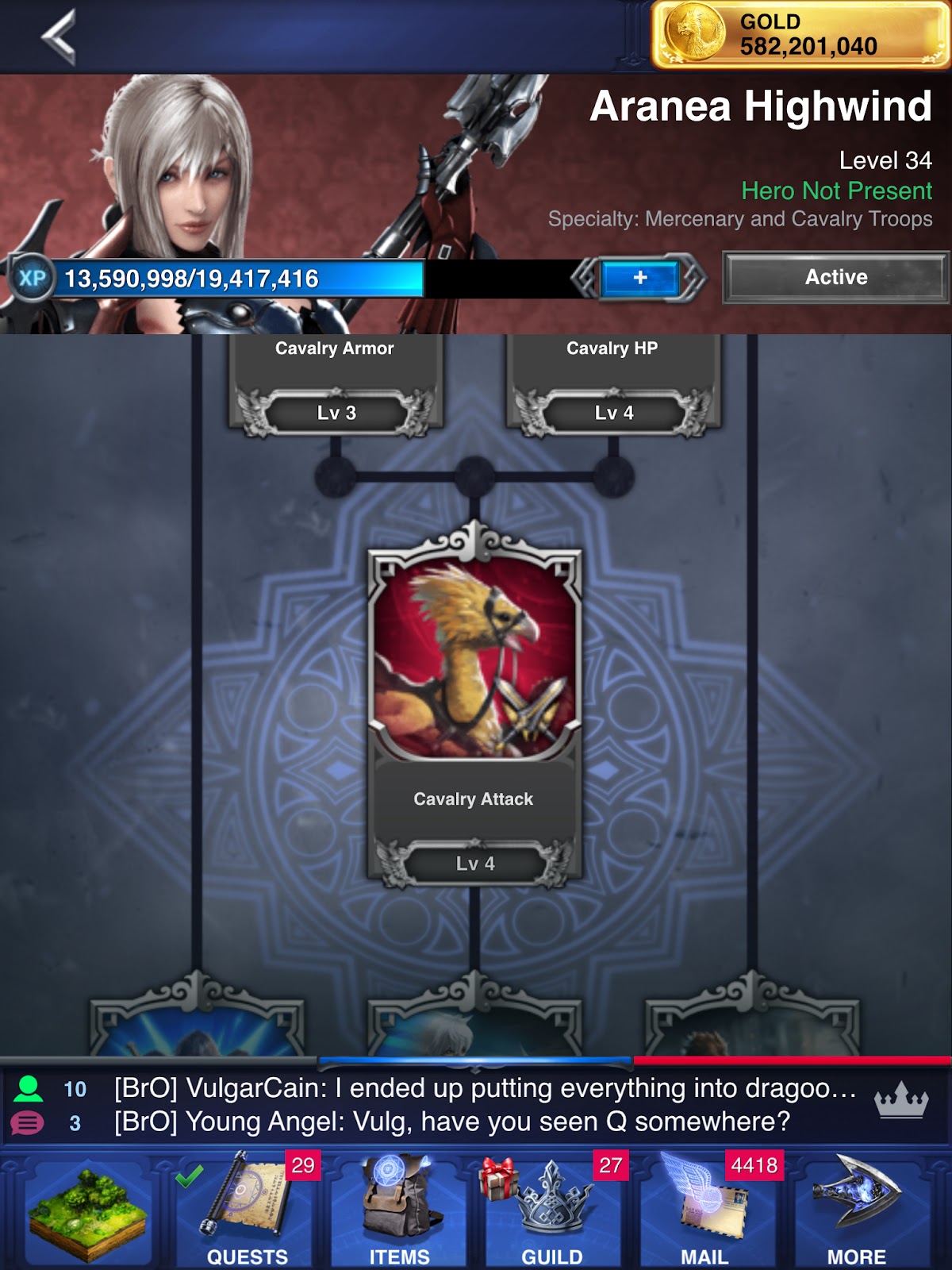 Just as Aranea’s Gear Set focuses on Cavalry, so do her Cavalry Attack, HP and Armor skills. Since they are the fastest of the four troops that can be trained in the Training Grounds, Cavalry are great for assaults against an enemy hive and during RvR when speed is of the essence. 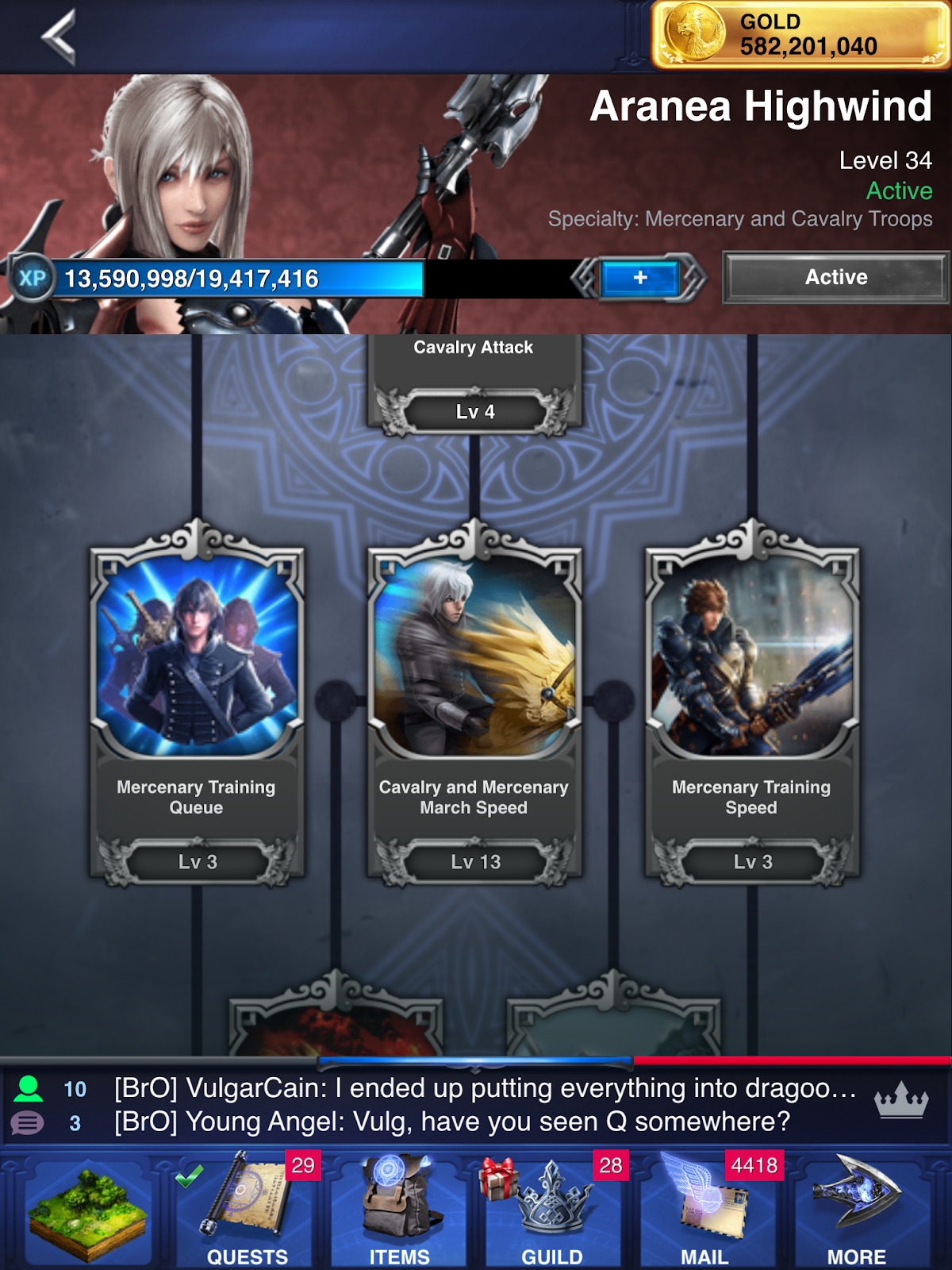 Next is Mercenary Training Queue, allowing you to train larger quantities of mercenaries at once. Mercenary and Cavalry March Speed, which can be an extremely helpful skill in many different situations, such as Crystal events, RvR, and enemy assaults. Finally, we reach Mercenary Training Speed, which will help cut down on the ridiculous amount of time it takes to train some of the most powerful mercenaries, such as Catoblepas Destroyers. 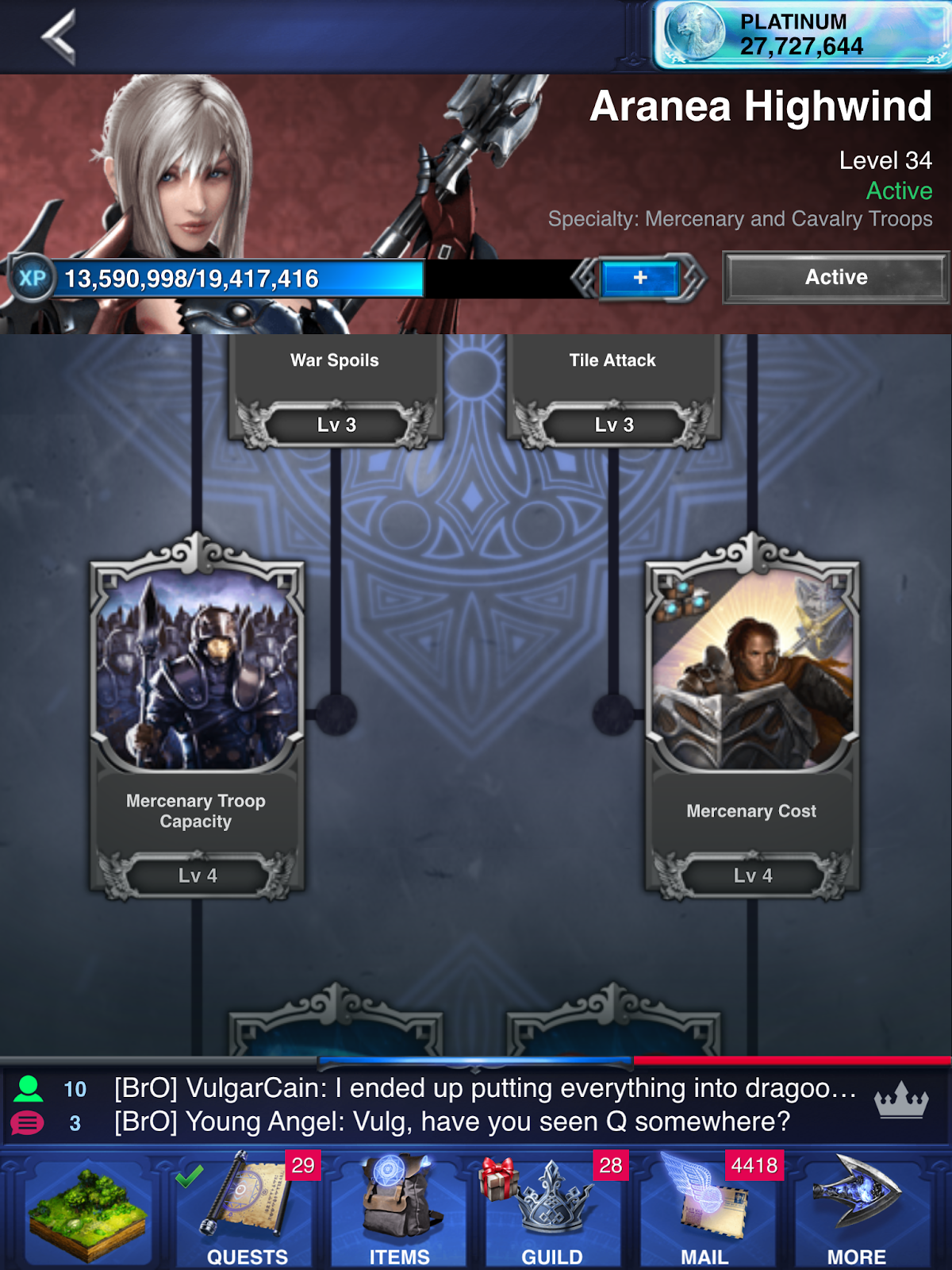 In the middle of Aranea’s skill tree are two game-changing skills – Mercenary Troop Capacity and Mercenary Cost Reduction. The former allows players to go beyond the capacity of troops that the Mercenary Fighting Pits will allow them to train, and the latter reduces the amount of materials used to train mercenaries, essentially allowing you to get more bang for your buck 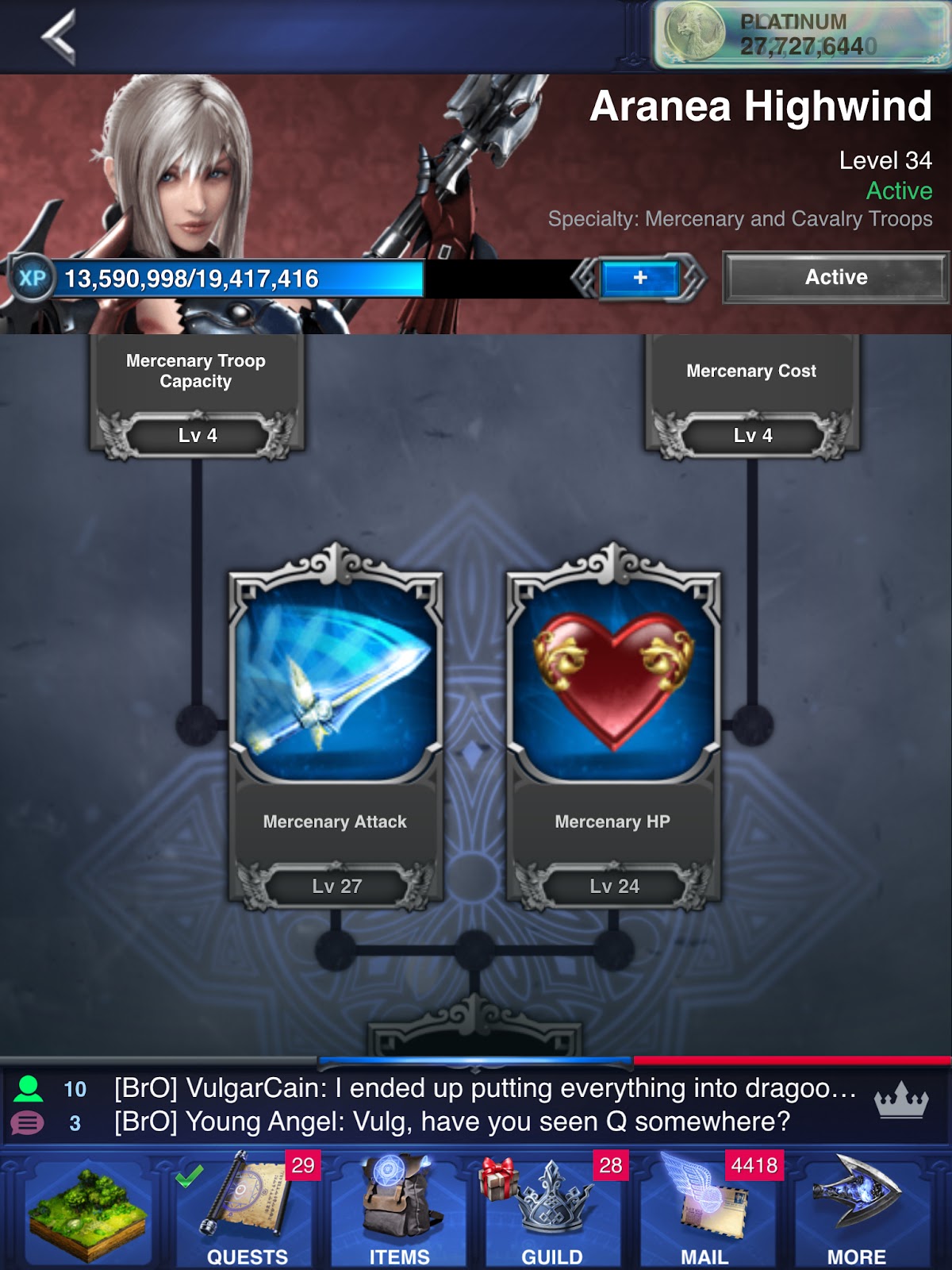 Arguably, two of Aranea’s best skills are Mercenary Attack and HP.  The reason these skills are so essential to gameplay is that they can simultaneously be used to bolster the HP of Guardian troops and increase the attack of Destroyer troops, further building upon each troop’s respective defense and offense capabilities. 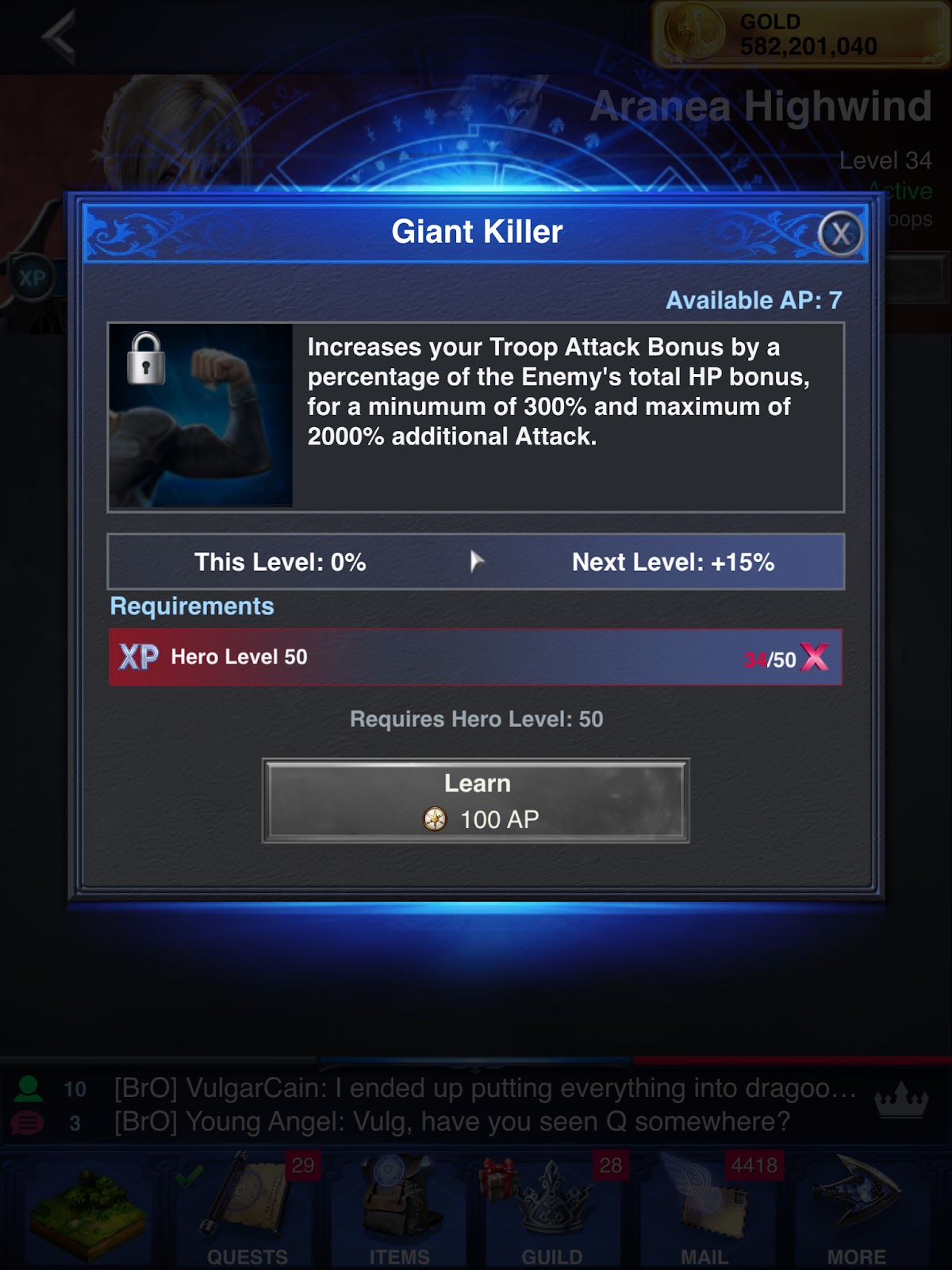 Aranea’s final skill, which requires level 50 to unlock, is Giant Killer. This skill increases your Troop Attack based on your opponent’s HP, with a minimum of 300% and maximum of 2,000% Troop Attack. If used correctly, this skill could beat even Ignis’ Master Tactician skill, which increases the attack of all troop types by up to 1,000% for Warrior, Mage and Cavalry and 3,000% for Siege. Presumably, Giant Killer also works for mercenary troop types and will be most effective when going up against defensive troops such as Crownsguard.

By now, leveling up a hero from level 1 should be a breeze. While the 1,000% EXP bonus event for Aranea is over, you can still gain EXP easily by attacking Magitek empires.

Attacking these Magitek empires gives great experience for any hero, but because Magitek are so weak to Dragoon troops, and because Aranea has both Dragoon Attack & HP as well as Mercenary Attack & HP skills, she will soar in levels after taking down just a few Magitek empires.

If you decide to allocate Aranea’s skills into Dragoon & Cavalry Speed as well as Dragoon Attack and Mercenary Attack, you should be able to take clear all of the troops in level 20 and 25 Magitek in just a single march using Aranea’s Elite Dragoons or Dragoon Reavers. These troops are also great for attacking Magitek that are too far away for other troops to march becausethey are extremely fast. Equip Aranea with Winged Assassin’s Gear Set, and sending her Elite Dragoons to attack a far away Magitek empire is a lot like launching a torpedo to blow an enemy out of the water.

Aranea has significant potential to be used as a trap base, but only if the defensive player utilizes Mercenary troops in their base. A potential drawback is the power added from leveling up Aranea, as traps prefer to stay lower in power to attract hits. In the tests below, Aranea was leveled to Hero 30, which added 1 million in power. For solo trapping, we recommend that you stop leveling up at this point, as there is no further Mercenary Attack benefit available until Hero 50, which adds significant power.  At Hero 50, the additional skill of Giant Killer can be unlocked. This skill has potential for rally trapping, but will result in a large power gain (and therefore wasn’t tested). 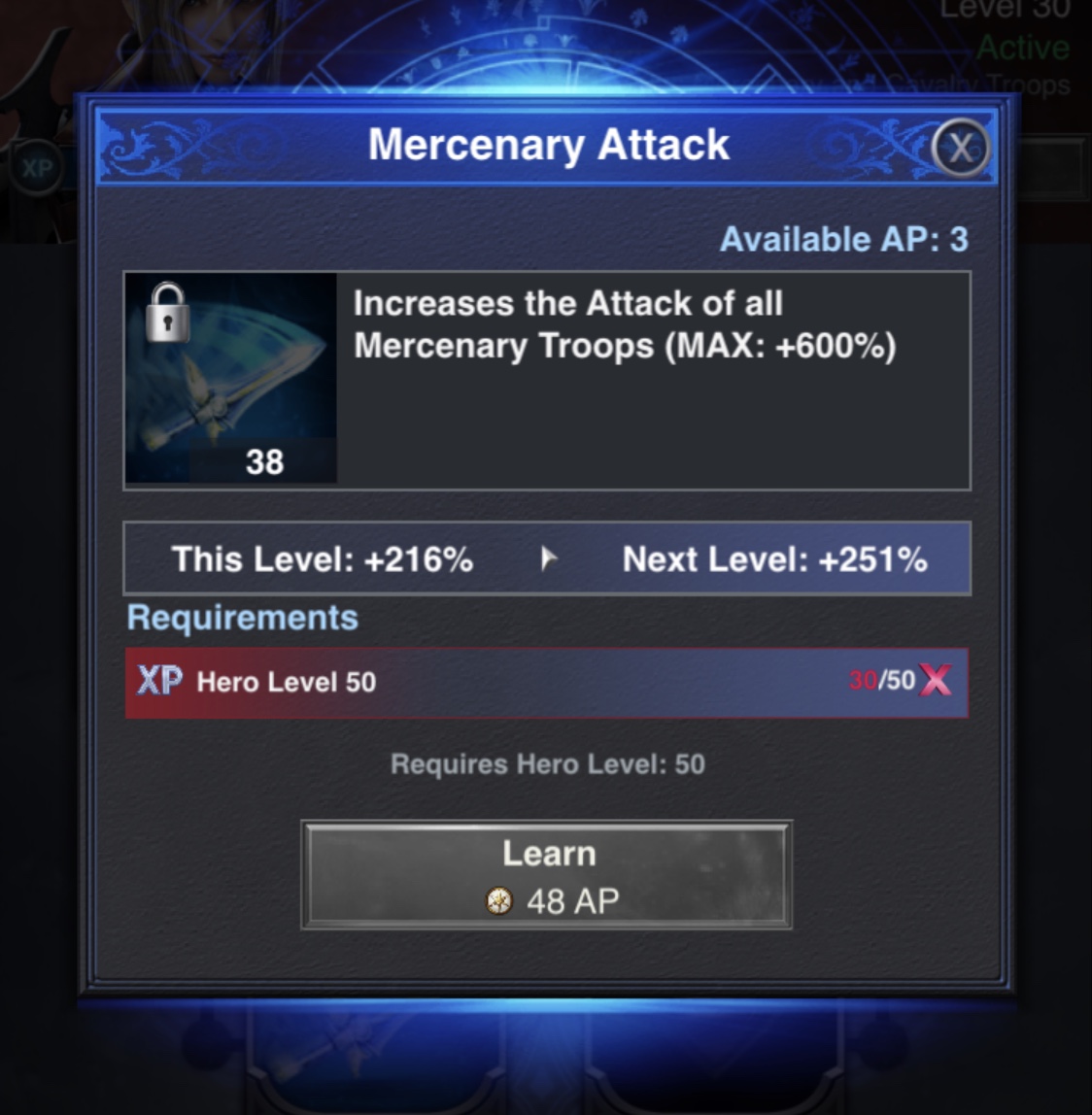 In the tests, the Mercenary Attack skill was maximized, and no points were given to Mercenary HP. as The gear worn (Undertaker and Mercenary), combined with a high volume of Crownsguard and Frost Guardians, provide a high level of HP; as such, it is not necessary to allocate additional points to Mercenary HP, due to the high HP that the gear and troop types already provide. Players may wish to allocate their skills differently, especially if they desire additional Mercenary Troop Capacity.

The tests below compare Aranea to Luna. Both hero levels are relatively close and the troop composition was exactly the same for each attack. As you can see, Aranea performed slightly better than Luna. While there are higher casualties than with Luna, the increase is minimal, and Aranea  killed more of the attacker’s march. (Remember: the game mechanics reward the player who kill or wound more troops, so your goal is to always find a balance to kill more troops whle keeping your casualties low.) Keep in mind that this empire employs only Mercenary Troops for its defense. For empires that utilize only a small number of Mercenary Troops, and a higher number of regular troops, Luna or Noctis will most likely still be the superior hero for that trapping style. 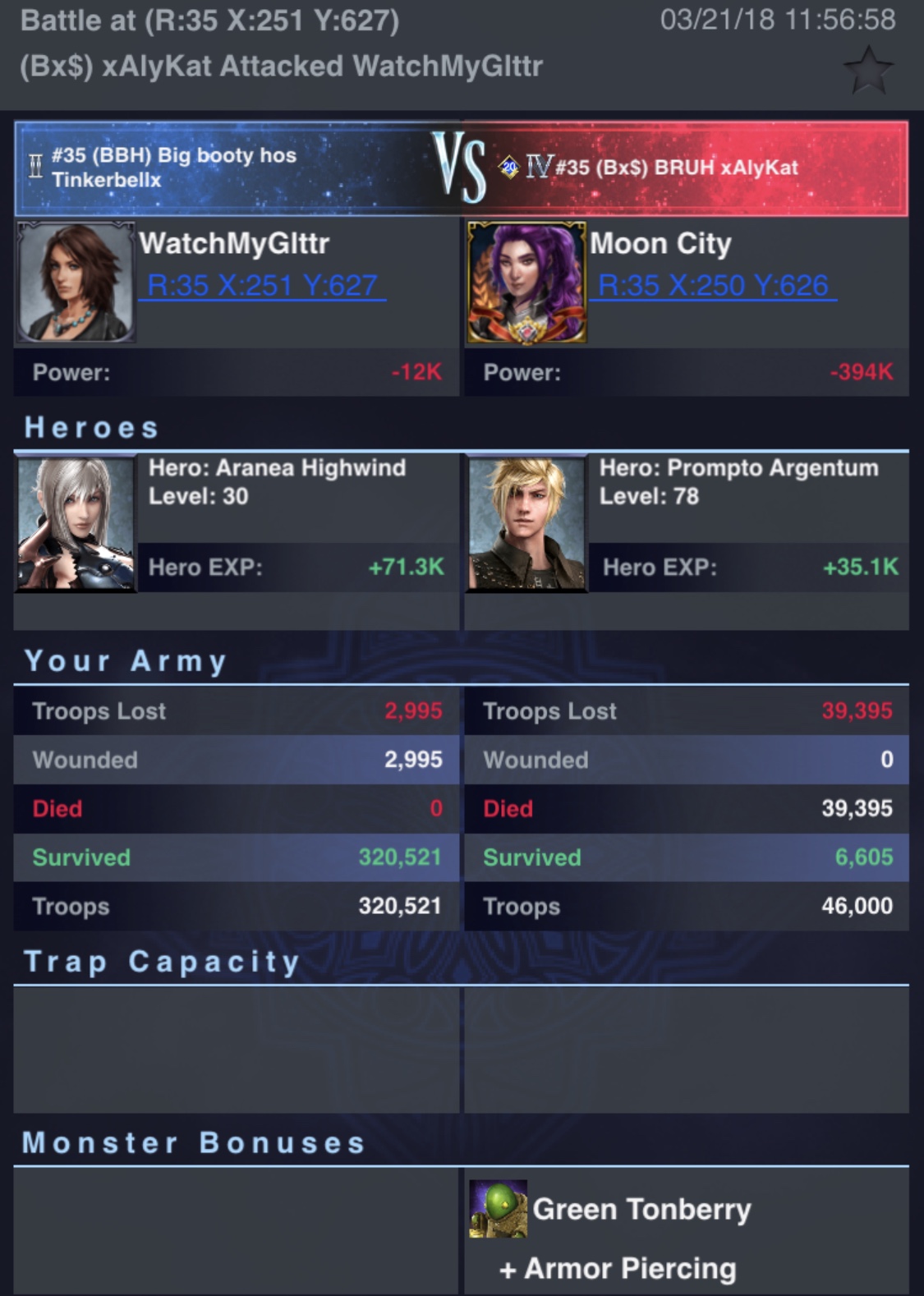 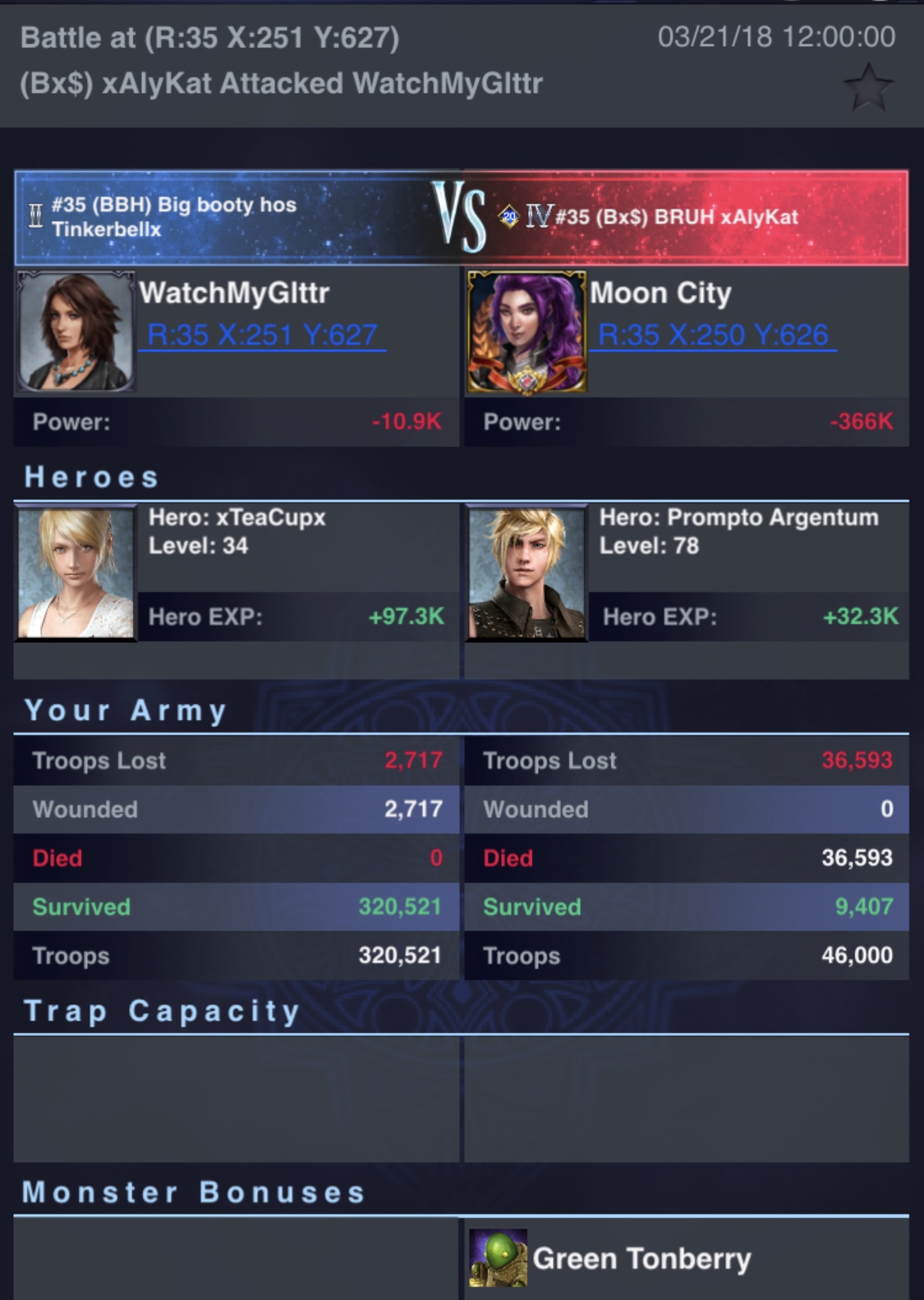 Should I Unlock Aranea?

Aranea provides great benefits for any offensive player with a focus on both Cavalry and Mercenary Troop types. If you frequently use Mercenary Troops, either for events or for regular attacks, then Aranea is a must-have hero. However, if you haven’t unlocked the Mercenary Fighting Pit or if you don’t have many mercenaries in your empire, than you may want to stick with Prompto or Noctis for attacking.

For defensive players, if you utilize a high volume of Mercenary Troops, or are a Mercenary Trap, then Aranea will be great for you to invest in, as she increases the amount of troops killed in each attack significantly. However, bear in mind that if your normal troops outnumber your Mercenary Troops, you may want to consider that Aranea might not be the best hero to use for defense, because her skills only buff Mercenaries.

The game has recently shifted considerably in both dynamic and scale, making mercenaries essentially the star of the show. Aranea's mercenary-focused skills will increase her value as a hero as more valuable mercenaries are released, making Aranea the go-to hero for events like Titan.

x Queenie – The Champion of Friendship

Aranea Queen of the Mercenaries

x Queenie - The Champion of Friendship