A new monster has been spotted wandering Eos! The Ronin may look very much like Dark Moon Yojimbos, but in truth, they couldn't be more different. In fact, Ronin is one of the strongest monsters yet!

In this article, we will discuss the requirements to use a Ronin and see how they measure up against other monsters in the Monster Farm. 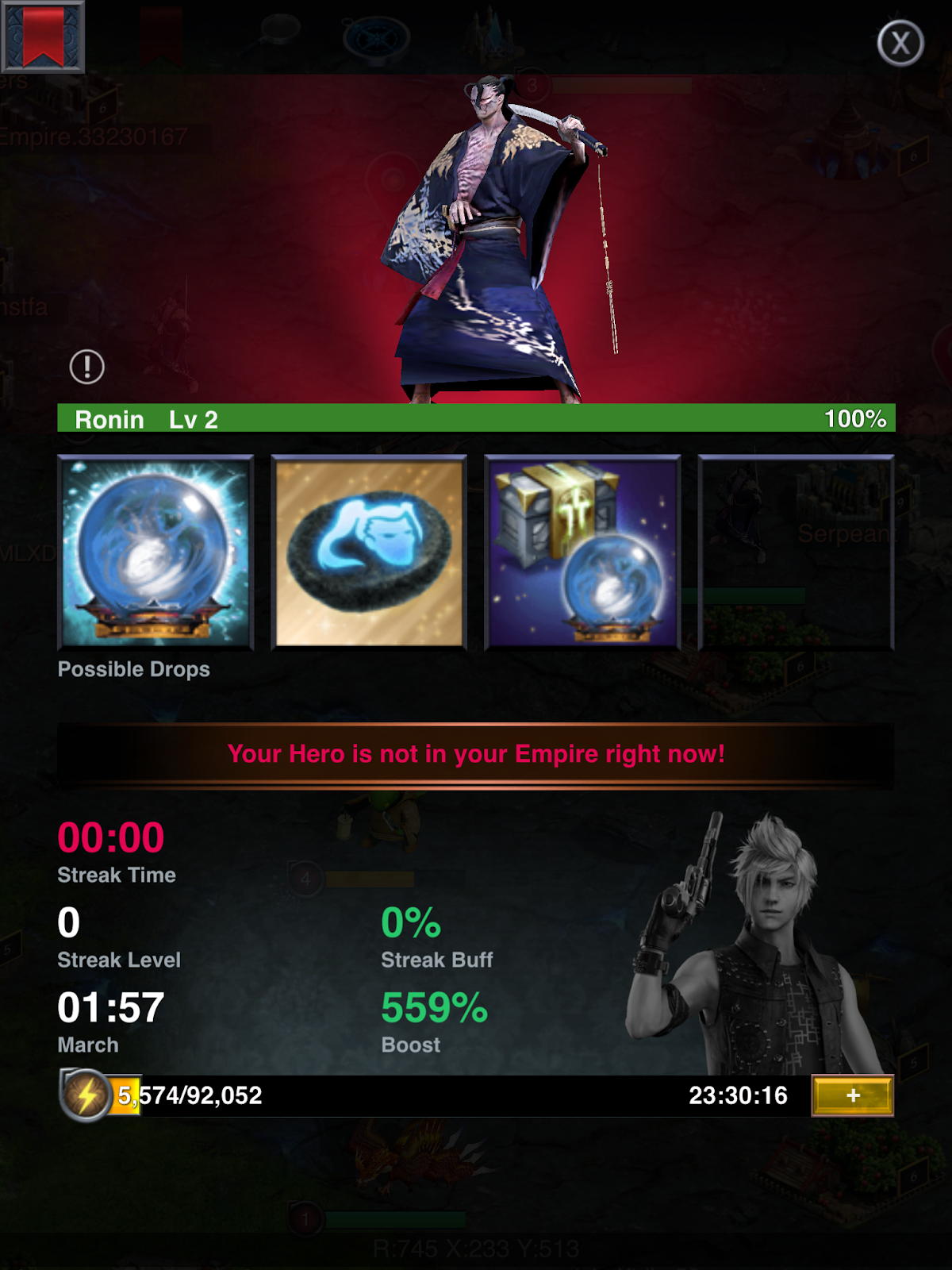 In order to use a Ronin, you must first have Monster Farm unlocked and upgraded to level 6.

There are 9 different types if Ronin to unlock in the Monster Farm. Each type if Ronin varies only by color and name, neither of which have any affect on combat. No matter which Ronin you hatch, they will give you the same boosts, which are discussed in the following section.

When a Ronin is active in the Monster Farm, any march containing your hero will have +150% Samurai Attack and +50% Armor Piercing. Let's take a closer look at what those boosts mean and how to use them.

First, it's worth pointing out that 150% Samurai Attack is by far the largest attack boost compared to any monster in the Monster Farm. On top of that, Samurai troops are the equivalent of T5 troops, meaning that any T4 troops in the same march will all die before any Samurai take damage.

In terms of attack, however, they have the potential to be even stronger than T5 troops. When attacking an empire whose citadel is a higher level than yours, all Samurai Mercenary troops gain a bonus of 900% attack, 800% HP, and 1600% armor. If you're using Samurai Mages with a Ronin and a combination of legendary Glacian and Mercenary Commander gear, your hero just became an unstoppable force of nature to be reckoned with.

Learn how to get the most out of Samurai mercenaries by reading our original article on Samurai troops here.

But Where Can I Get Samurai?

Although Samurai mercenaries are not currently available to train in the Fighting Pit as of the date this article was published, they are known to pop up from time to time in 2 hour special events where all Samurais are open for training. Be sure to keep your eye on the events and take advantage of the opportunity to train as many Samurai as possible when they become available.

Sashimonos, the items required to train Samurai troops, can be obtained by gathering on Immortal Hero Caches that pop up after killing Weakened Behemoth Tyrants. You can also find these in numerous chests.

Ronin is an excellent addition to the Monster Farm. However, it will only prove to be useful for players who have Samurai troops.

If you have Samurai troops, or plan on training Samurai, then the Ronin is definitely worth unlocking. Players who meet the special criteria for unlocking the Samurai’s attack bonus will undoubtedly be able to wreak havoc with this Samurai + Ronin one-two knockout punch.

For players who do not have the Mercenary Fighting Pits or do not have any Samurai currently trained, the Ronin doesn't provide anything that the Tonberry can't do 4x better.

March Size in the Dark World 2.0